Working with the Isle of Wight Community

Working with the Isle of Wight Community

Over the years, John O’Conner, working with our client the Isle of Wight Council, have engaged with the local communities on the Isle of Wight to help facilitate planting schemes and this summer has been no different.

Our team on the Island joined a group of volunteers, led by community horticulturalist Mike Fitt, to work together and bring back to life a forgotten corner of a square adjacent to the  Co-op in the seaside town of Ryde.

The weather was not on form for the day, however that didn’t stop the volunteers and JOC team going ahead! Everyone who attended worked together to remove a vast number of weeds and rubbish from the planters and replaced with 500 colourful bedding plants.

Mike Fitt OBE, an ambassador for South and Southeast in Bloom, said the planting project had taken a long time to organise but it was good to see it finally being realised. Mike commented: “The flower beds had been empty and forgotten for some years. Now they are looking good. But this is just a temporary arrangement for the summer. It should be done every year. Ultimately, the aim is for permanent sustainable planting.”

Mike praised the hard work of the volunteers and JOC staff whilst thanking the IOW Council’s Parks and Countryside department and Ryde Town Council for their support. 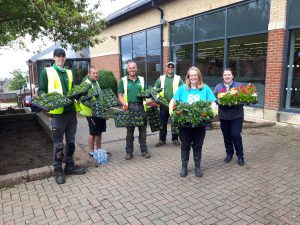 Joining up with the local community doesn’t stop there, Mike Fitt is now working with the Island Line’s Community Rail Partnership to develop a new community engagement initiative called “Down the Line”. An important element of the proposed project is to nurture community involvement through horticulture.

With this in mind the “Down the Line” initiative has undertaken its first pilot scheme, led by Jenna Sabine of Monkton Arts and supported by the IOW Council. This involved Year 5 schoolchildren, from six local schools, entering a competition to design the planting of six flower beds, in the style of Victorian gardening, at Eastern Gardens, on Ryde seafront,. The children were asked to base their designs on the continents of the world.

To create the right setting for the display of the winning designs and reflect the Victorian theme, John O’Conner staff, overseen by IOW Parks and Countryside Officer, Kristian Horlock, removed unnecessary clutter such as iron railings, created new flowerbeds and sowed new lawns.

The winning design from each class has now been planted up by the JOC, with the winners being invited to a prizegiving giving ceremony on the 15th of June, which will also mark the opening of the exhibition displaying their designs which will be held at the Monkton Arts, Sara K children’s gallery, running from 15th – Sunday 27th June.

JOC staff, Dave Kalaker and Andy Emery planting up the children’s designs in the new flowerbeds. 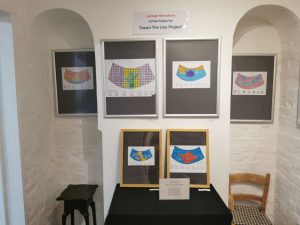 “From the start of the project, all the children were incredibly engaged and excited to take part in a project that they would be able to go and see once it was completed. When creating their flowerbed designs, the children were taking their time and making thoughtful decisions about what colours/patterns would work best for their scheme. The children couldn’t wait to find out who had won and they are so excited about seeing the winner’s design after it’s been planted.”